During the first 4 months of 2017 my husband and I had both undergone operations, my husband on the large intestine and myself on the breast. We have both used alternative therapies to reinforce the immune system and for the pain. During these months I have used the lifewave patches quite a lot with good success. I was choosing the placement points based on the Lifewave instructions but also on my extensive studies on the meridiens based mostly on the book of the Greek therapist Shakila Ioanna Brati “Crystalic accupancture and Gemstones – A book-guide to healing”” – DION EDITIONS, 2015.

Of all these cases, I would like to reffer to two of them with immediate and spectacular results:

A) For the pain after the surgery on the intestine I have used the clock method without success, so I then placed the Ice wave patches on the Kidney -1 point to eliminate “reflectory”pains and I used a second pair of Ice wave patches on Large Intestine- 4 , one of the most important points of the LI that both relieves pain and activates the LI meridien. My husband was relieved from the 80% of the pain within 10 seconds after placement , on the same night after the operation and to the big surprise of the hospital staff he never used the strong pain relief pills given to him by them.

B) On the second night after my operation on my breast and probably because of the removal of the first lamp of the lymph gland under the right arm, I woke up in the night ,feeling my right leg and feet very heavy and swollen. I then placed an SP 6 patch on the SP-6 point on the left leg and a Glutathione patch on the SP-6 point on the right leg, as this point activates the spleen and the circulation of the body effluents. Within 5 seconds of placement a cooling feeling went through both my legs from my feet upwards and I was able to go back to sleep. I left both patches on my legs for 3-4 days and since then this symptom did not return.

I must say that the Lifewave patches never ceased to amaze me with their results both in discomfort relieving and healing, during this difficult period of my life. 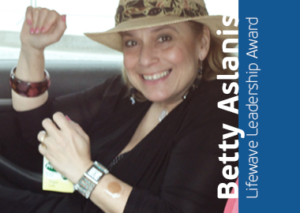